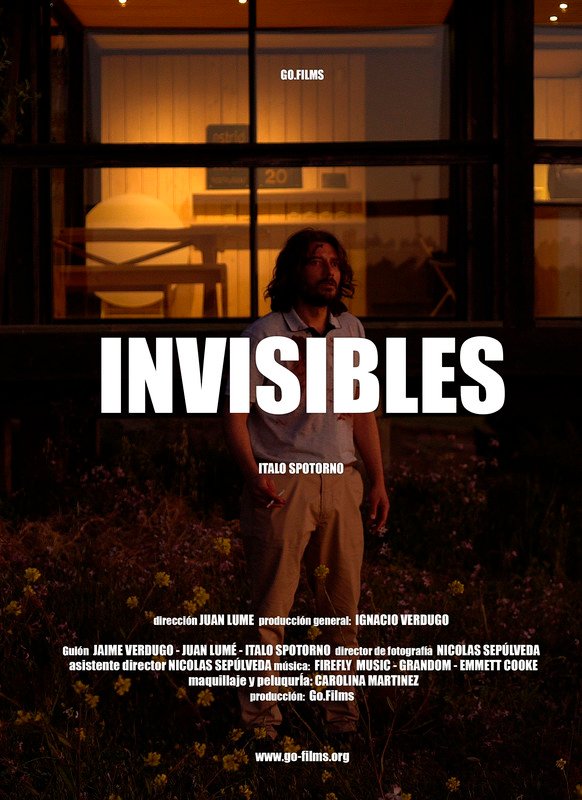 Invisibles by Juan Lumé is a drama short film. This story is written by the director himself with Italo Spotorno, the main actor, and Ignacio Verdugo, the co-producer with Lumè.
The story starts when Andres, a 38-year-old property broker, receives an offer to sell a house, which he does not hesitate to accept. After the difficulties suffered during the past years, he has worked hard to restore his situation.
The day begins with a visit to a house on the outskirts of the city, which provides Andres with a strange mixture of restlessness and peace. When he opens the door, for some reason, the image causes him a jolt of unease: a slight, irrational shiver that passes quickly as it has appeared. The house looks sinister and it’s almost empty. It’s hard to imagine what kind of person lived there before. Nevertheless, gradually, Andres finds traces of his own life.
Flowers in the bathroom or specific music would seem absolutely normal to most people, but for him, they are just the opposite: they are clues. Between gloomy walls and nightfall, hallucinations become confusing memories. It seems as if the person he contacted to sell the land is someone he already knows. Someone he wants to forget. But that person is now at home… The night ends, and under the sun, a deep feeling of desolation takes over reminding him of what he could not face.
Dealing with a strong exploration of the past and of the unconscious, the director uses very specific camera moves to take usto the main character’s inner trip. All the shots convey this sense of research.Nicolas Sepulveda’s refined and extremely elegant cinematography sustains this research.
The editing is smooth at the beginning and develops to become agitated and syncopated as the short film progresses.
Another great point of Invisible is the performance of the main character, played by Italo Spotorno. The actor is remarkably intense and well directed by Juan Lumé. The audience is touched by a strong sense of suspense and fatigue in the actor’s inner search: looking back in the past is hard work for everyone that dares to do so.   The sound design is minimal and efficient in conveying the feelings of the main character. The director’s brilliant choice of the location is extremely efficient in the communication of the character’s state of mind.Obviously he’s not a novice: Juan Lumé has been a Director and Producer with over 10 years of professional experience, as well as a Founding partner of Go.Films, and a Producer dedicated to both fiction and theatre. Highlights of his career as a Director include:
INVISIBLE (2021 / Short film - Fiction)
Winner 1st Monthly Film Festival:Best director – Best Indie Short Film. Special mention: Short Film – Production – Actor – Thriller Short Film
Winner 4th Dimension Independent Film Festival: Best director Juan Lumé -Best Actor Italo Spotorno - Best Producer Ignacio Verdugo.   Winner Chicago Indie Film Award: Best Director.   Winner Berlin Indie Film Festival: Best Director   Independent Shorts Award: Bronze Award Best Production Designer (Ignacio Verdugo) - Bronze Award Best Thriller Short – Honorable Mention for Best Director (Juan Lumé) – Actor (Italo Spotorno) and Indie Short.
Semi-Finalist Berlin Shorts Award   Official Selection Prague International Indie Film Festival Official Selection 2021 ARFF Berlin international Awards Official Selection CKF International Film Festival Official Selection Montreal Independent Film Festival Official Selction IndieX Film Fest

CAÍDA LIBRE (Free Fall) 2018 / Short film - Fiction
Theatre Director of the play PROMETEO, launched in 2019 in the city of Montevideo, with a roaming season in Uruguay, as well as in different theatre halls in Buenos Aires, Argentina in 2019. During 2015 and 2016, he presented the theatre play HANSEL Y GRETEL (play nominated to the 2017 CLAP awards with the largest 2016 audience) with two successful seasons in the theatres Coca Cola City and Centro Morí. He is currently working in the pre-production of his first feature film ASEDIO, both as Producer and Director of the project. In addition to his work in Go.Films, he developed his career for three years as General Producer of the multi-space cultural theatre “Ladrón de Bicicletas” in Santiago – Chile. During that period, he was responsible for the following activities: Executive production – Program design of all billboard works – Sponsorship management – Coordination of activities and new hires.
He has vast experience in pedagogy, teaching short film workshops in the field of Fiction at the Cultural Corporation Balmaceda 1215.
He also noted, concerning this short film: "Invisibles emerges from the concern to investigate the different reactions that our memory can have facing traumatic events and how our brain can block all its memories in front of such reaction.”
We can confirm that he really reached his goals and will add that his strong experience doesn’t seem affected at all by the low production budget.For all the above mentioned reasons, INVISIBLE was awarded Best Director Short film in May 2021 by the Berlin Indie Film Festival. 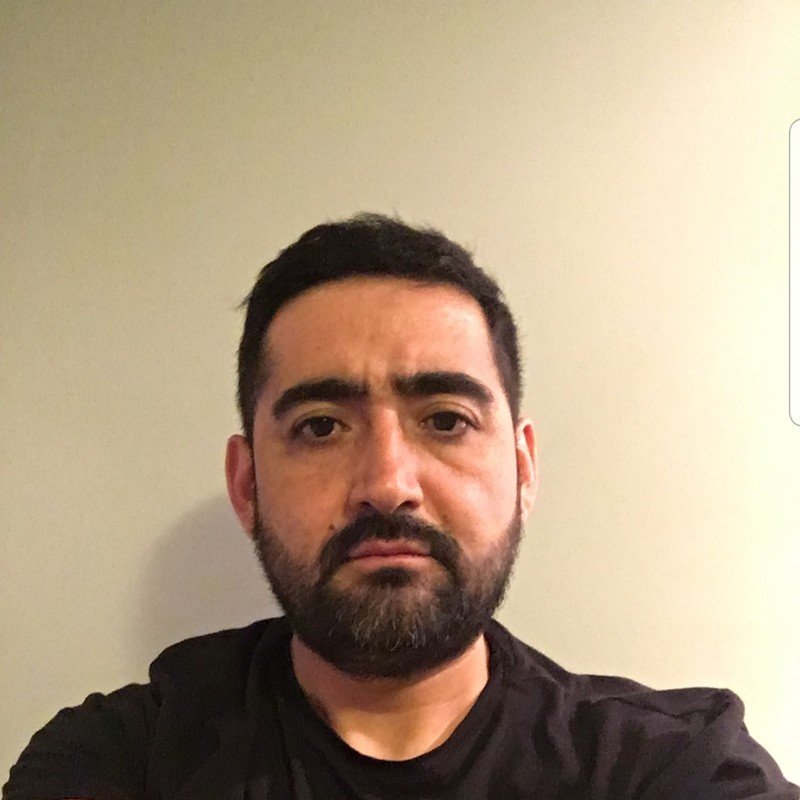 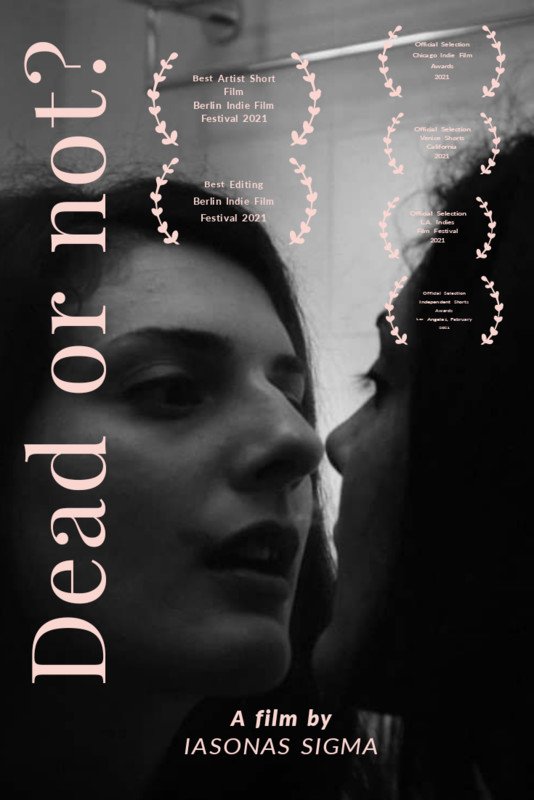 DEAD OR NOT? is a very courageous Artistic short film directed by Iasonas Sigma (the artistic name for Dimitris Sdrolias), who is also the writer and producer.
It deals with the story of a young woman. She wakes up in a hotel room. She gets out of bed. She washes her face, combs her hair, puts lipstick on her lips. She realizes that this is what she does day after day when she wakes up. She feels the urge to break this chain. She strips and goes to the room's balcony. She imagines that this is her last day. She smokes as if this were her last cigarette. She looks at the world as if this were her last gaze. Suddenly, she feels the urge to fall indeed from the room's balcony. She climbs and...
The actress Filia Kanelopoulu is very well directed, always believable, and very realistic even if the atmosphere is surreal.
This woman's day is told in a very expressionist way by the director, choosing details and fragments of the life of this woman. Even the choice of the 3/4 format conveys a sense of voyeurism and the limit of the gaze on the scene.
The choice of black and white puts this story out of time, in a period that can be anytime and universal. The director of photography and camera operator is Manos Tzivakis. From the beginning, the camera movements approaching the room, and every detail of the room and the woman as if it was subjective at this choice give a strong sense of suspense. Also, the sound design created is very intense and anxious. The rhythm of the editing is both nervous and engaging.
So all these elements allow the audience to be involved from the beginning to the end of this short film. So a very brave and well-done first film for this director and we can't wait to see his next film.
The director is, as we wrote earlier, Iasonas Sigma, who shot this film with a very low budget, choosing an aesthetic that is so smart that it doesn't suffer from this condition.
Iasonas Sigma (the artistic name for Dimitris Sdrolias) is a Greek director, philosopher, psychoanalyst, and acclaimed writer, (having won numerous prizes for his poetry, prose, and theatre plays), Doctor of Philosophy and Psychoanalysis at the National and Capοdistrian University of Athens. He attended the Hellenic Cinema and Television School Stavrakos and studied theatre at "Karolos Koun-Art Theatre" of Greece, (having played as an actor at the Ancient Theatre of Epidaurus) and soloistic piano at "Athens Conservatory" and the "Staatliche Hochschule für Musik und Darstellende Kunst" in Stuttgart, with recitals in Greece and abroad. After his student film "ANOIKIOSIS", "DEAD OR NOT?" is his first film.

DEAD OR NOT? won the February 2021 monthly competition at the Berlin Independent Film Festival as Best Artist Film.
Congratulations to all cast and crew! 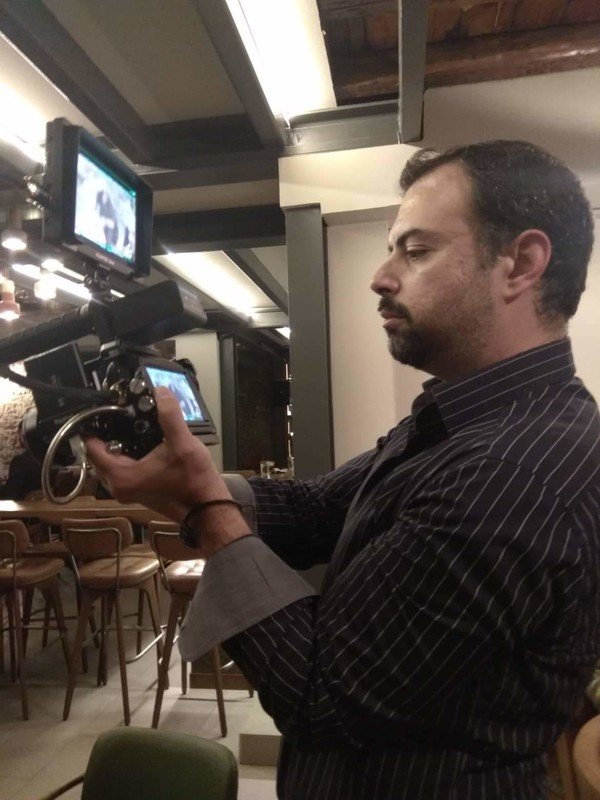